The body of work, written, continues the incorporation of text into my art. Language has been an ongoing element of my work since the mid-90s when I initially added braille to my black and white photographs. This mixed-media, photographic experimentation, marked the beginning of my transition away from photography to something with more substantial with solid depth. What I intended to convey through my art had moved beyond the flat confines of photography, and this realization marked my, now, permanent shift to sculpture.

As an assemblage artist, I am constantly juxtaposing objects of interest, bringing together items that would not appear to go together at first glance. Assemblage, is the process of addition, of building, and of cleverly combining materials. Ironically, I am now selectively eliminating elements as part of my process by using a CO2 laser to carefully engrave text into objects. The engravings build upon my fascination with text while irrevocably removing material from these new pieces. The matter that the laser so delicately and precisely vaporizes is gone forever. This permanent act challenges my process and elevates the act of creation and destruction as a central component of my new body of work, written.

written is an ongoing series with multiple works under its’ umbrella. tools, where I engrave false names into the handles of various wood-handled hammers. foodborne, in which I engrave the definitions of deadly foodborne illnesses into rolling pins. empty box where the text of well-known literature is engraved into the interior surfaces of old, wooden boxes. politics, in which I engrave politically charged words onto the puzzle pieces of a U.S. map. games, where I engrave the text from President Trump’s speeches onto vintage board games. And shoveling, which playfully draws attention to idioms in the English language.

Tools (2018) is a conceptual body of work which continues my interest in using found objects as social commentary. The installation presents tools largely unadulterated aside from deeply engraved words which contradict what the viewers see before them–a hammer with the word “screwdriver” embedded on its handle, a hand ax labeled “shovel,” and so on. Tools challenges viewers to consider how these objects reaffirm or defy basic truths. The erroneous laser-engravings are heavily influenced by the United States’ current political climate. The basic, blatant falsehoods in Tools question what fact and reality are in the era of “alternative facts” and “fake news.”

The foodborneseries is composed of five wood rolling pins, each engraved with the Center for Disease Control and Prevention’s definition of five major and fatal foodborne illnesses. The diseases are Salmonella, Escherichia Coli, Campylobacter, Shigella, and Botulism. These definitions are engraved backward on the pin, meaning the words can only be read once the rolling pin has been used. foodborne draws close attention to the dual nature of food as a necessary sustenance for survival which, simultaneously, threatens one’s mortality. Societally, food is closely aligned with gathering, be it with friends and family or new acquaintances, aligning the act of cooking and eating with trust. Trust that the cook has properly prepared a meal, rendering it safe to consume. All the while, news reports detailing outbreaks linked to contaminated food seem to have become common.

Continuing my exploration of pointed juxtapositions, the empty box series plays with one’s perception of “empty” versus “full”. Here I engrave the text of well-known literature onto the interior surfaces of vintage, wood boxes. The selected literary works are informed by the original cargo once held within each box, establishing a link between the selected text and the box’s previous life (e.g. a box once used to ship Remington ammunition engraved with the Art of War, Sun Tze’s 1400 year old treatise on military strategy and tactics). The original advertising on each box’s exterior effortlessly draws the eye in. At a glance, the box appears void of any content. However, upon closer inspection, the viewer discovers words densely populating the box’s internal surfaces. Now fully captivated, the viewer’s curiosity naturally motivates him/her to decipher the text and draw conclusions between it and the container that bears it. Like the other pieces under written’s umbrella,empty box’s deceptively humble presentation challenges viewers to journey between the layers of the piece, connecting the visual and conceptual clues in order to appreciate the work in its entirety.

Using a vintage Parker Brothers1 Copyrighted 1915 wood puzzle of the United States, I present viewers with 100 words laser engraved across the puzzle pieces. The list is composed of terms used by politicians to either demonize their opponents or glorify themselves. To remove any bias on my part in organizing these terms, I used a random number generator to order them. In a perfect world, the U.S’ political structure would function free of bias in its supervisory branches, as it was intended. However, America’s political framework has been broken for a long time, infected with a number of loathsome tactics varying from gerrymandering, misspelled districts, and voter suppression, to outright intimidation.  politicspresents the viewer with man’s equally unifying and divisive behavioral trait, the need to gain an advantage over one’s opponent no matter the cost or consequence.

shoveling continues my exploration of language, this time playing with the use idioms, and forms part of my ongoing, laser-engraved series, written. An idiom is a phrase or expression that has a figurative meaning which differs from its’ literal meaning. There are thousands of idioms, occurring frequently in all languages. The English language alone is estimated to have at least twenty-five thousand idiomatic expressions. shovelingbegins my journey into the fascinating world of idioms by focusing on action-oriented phrasing paired with the simple shovel, a common tool dating back to 5000 years, but one full of figurative meaning. 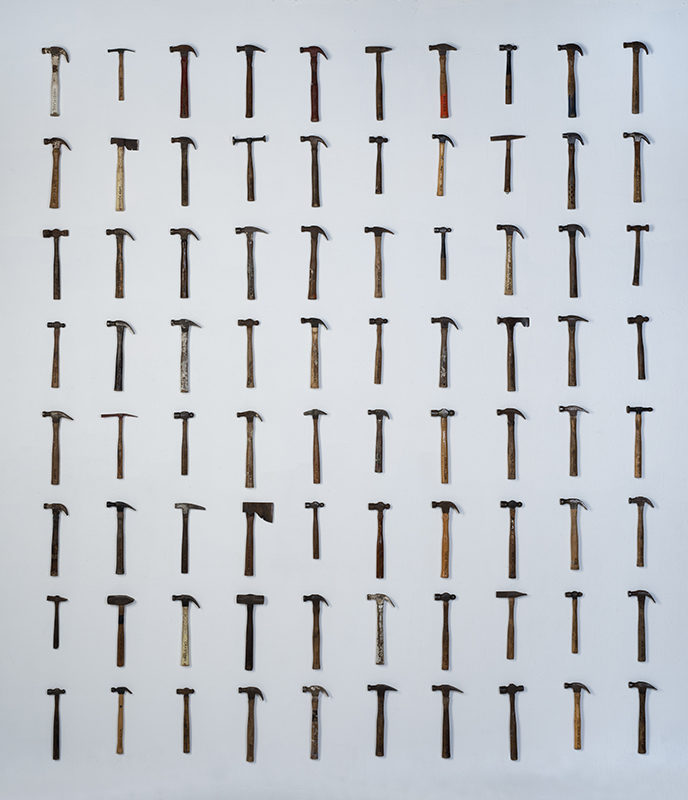 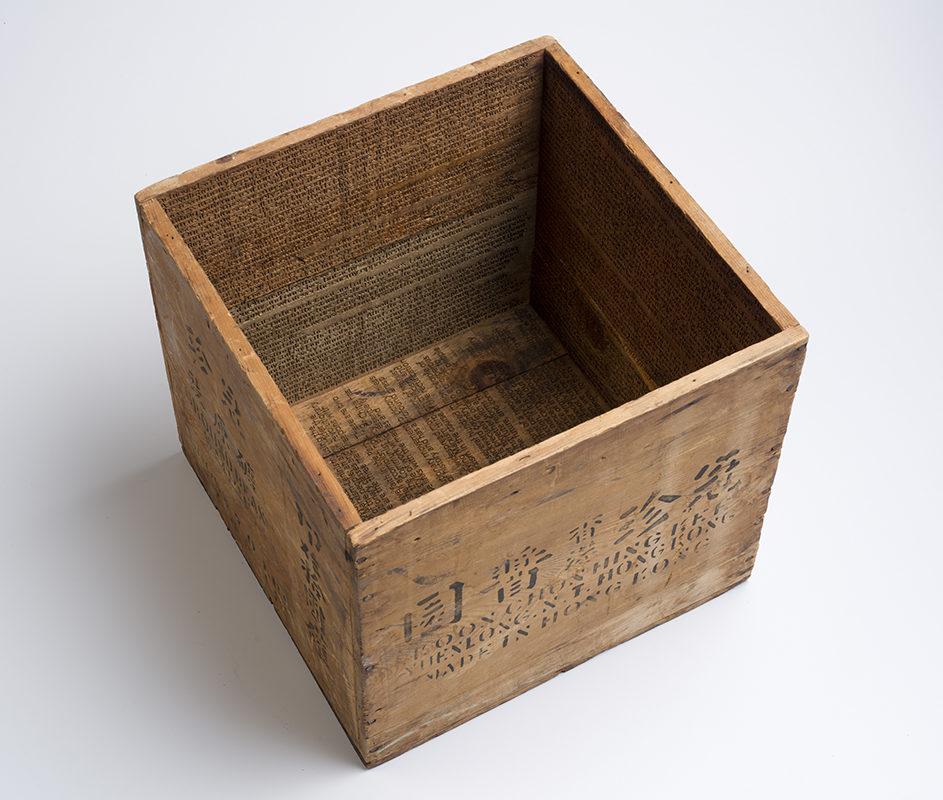 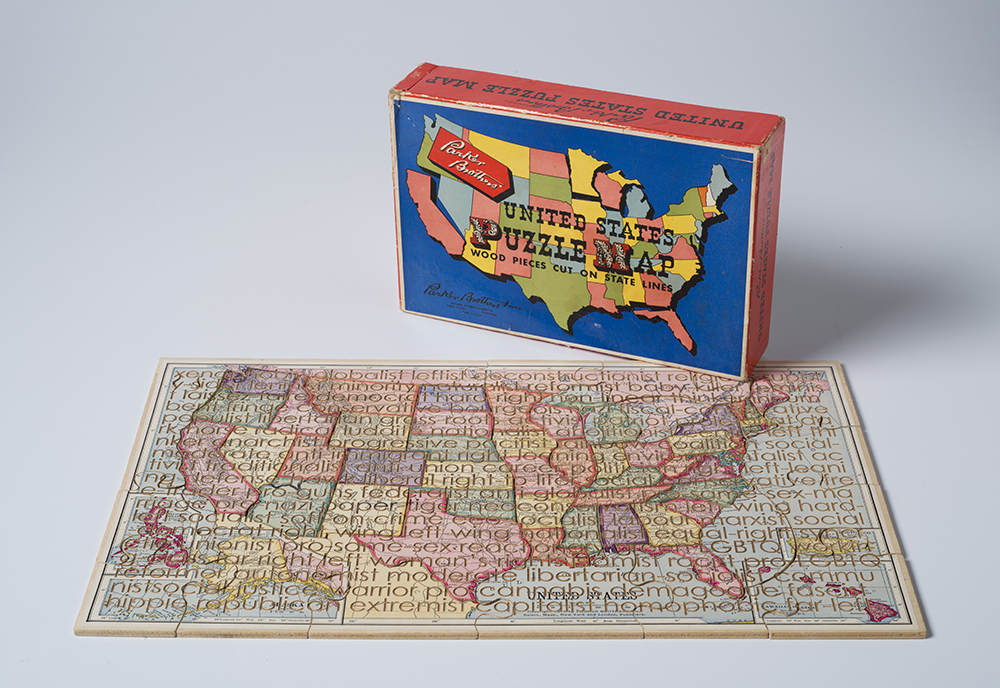 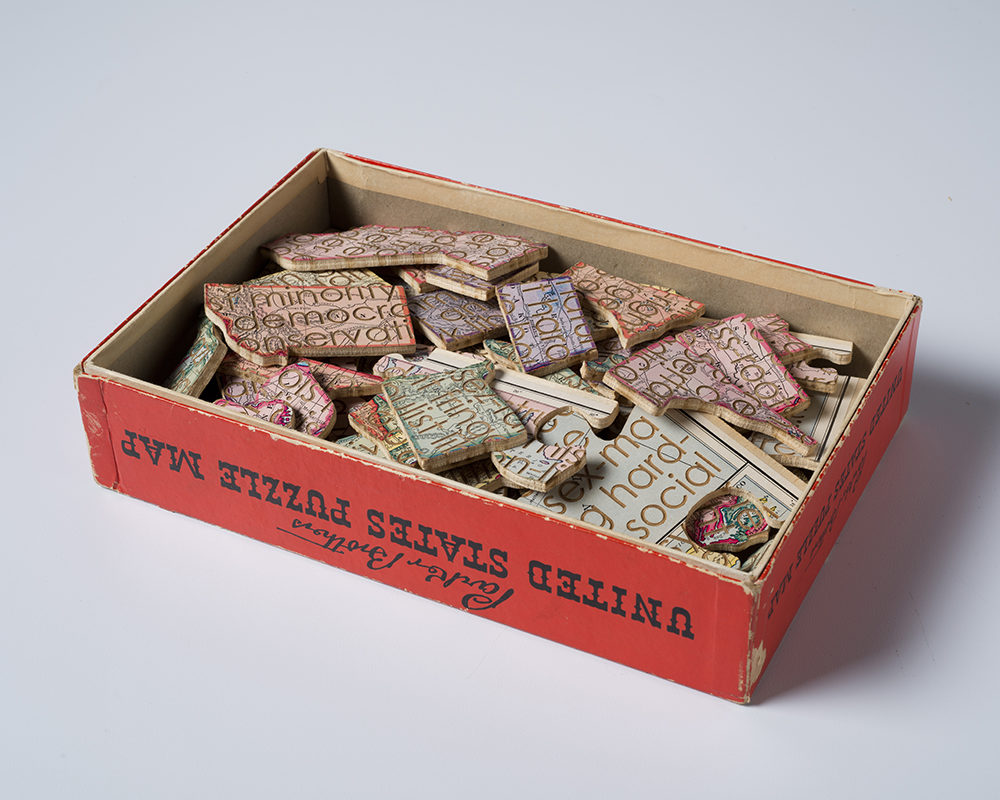 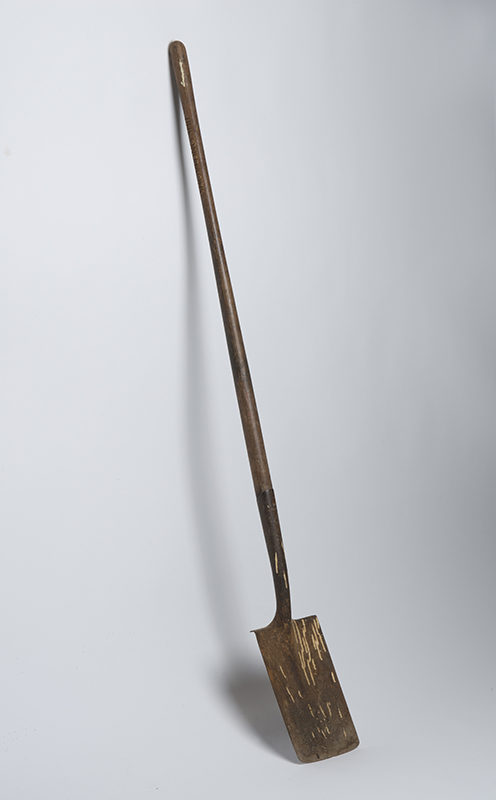 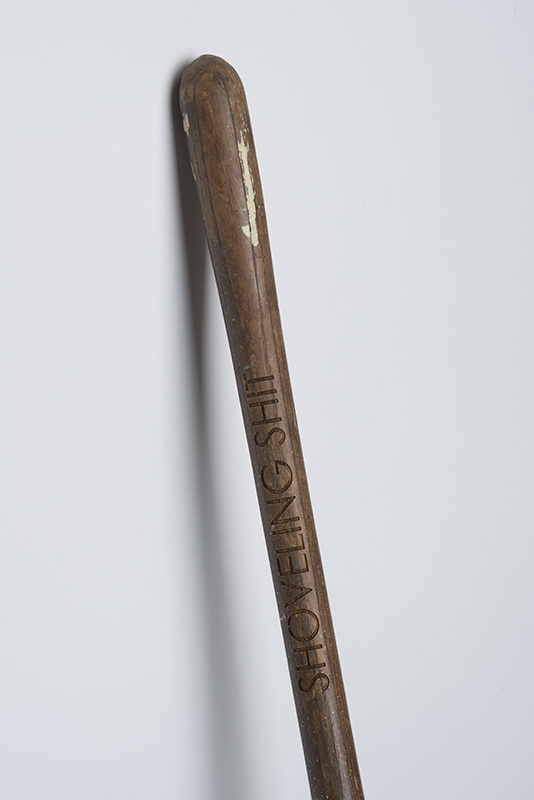 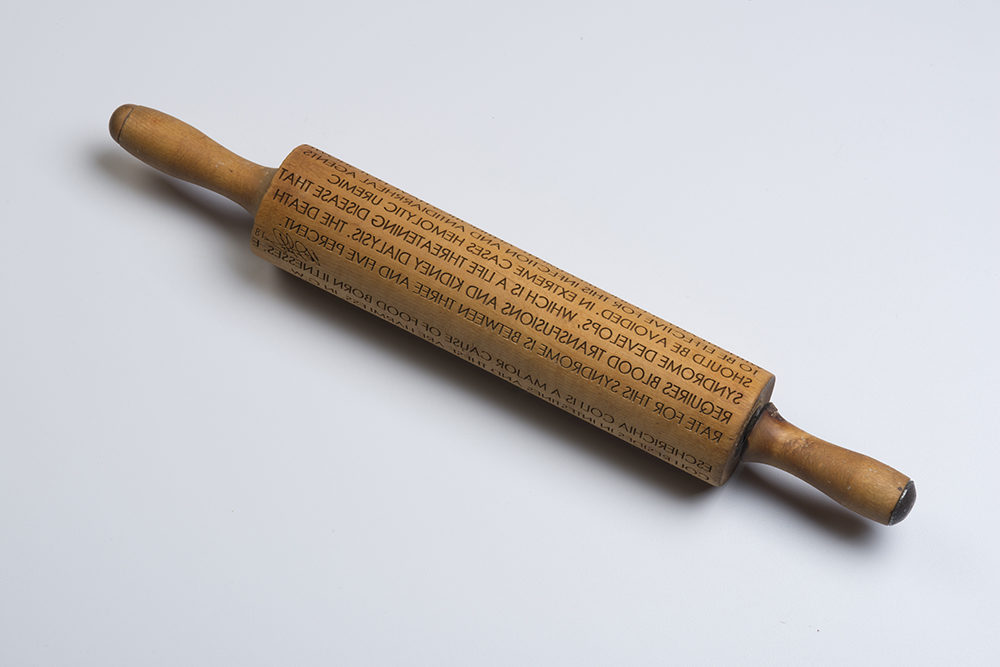 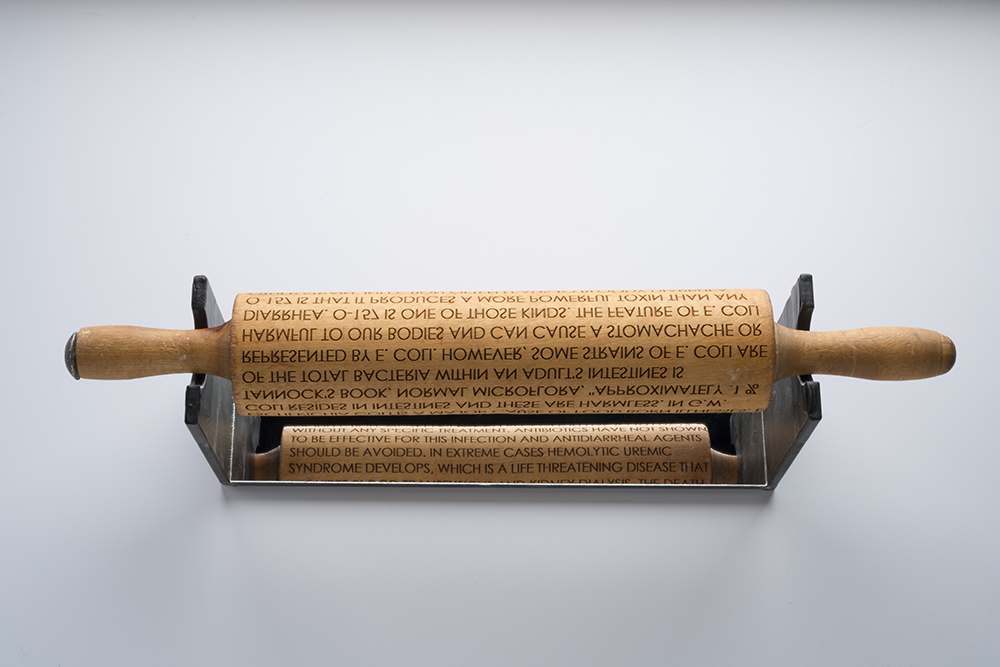